When twin beavers Norbert and Daggett leave their home behind to begin living the lifestyle of wild and crazy bachelors, hilarity is bound to ensue. Featuring all 26 episodes from the zany show's first two seasons, this sidesplitting four-disc set of Nickelodeon's hit The Angry Beavers is guaranteed to have you rolling with laughter!

Includes fan-favorite episodes such as "Bummer Of Love," "Fancy Prance," Food Of The Clods," "If You Insisters," "Beaver Fever," "The Day The Earth Got Really Screwed Up" and more! 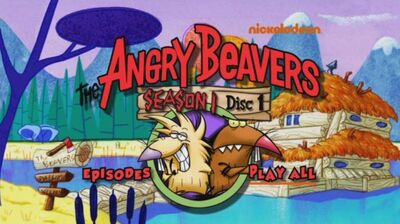 Retrieved from "https://angrybeavers.fandom.com/wiki/The_Angry_Beavers:_Seasons_1_%26_2?oldid=28063"
Community content is available under CC-BY-SA unless otherwise noted.