The Angry Beavers: Season 3, Part Two is a two-disc set for the second part of season three, which was released August 14, 2012.

The Twins Are Back!

Norbert Foster and Daggett Doofus continue their sidesplitting adventures in this uproariously funny 2-disc collection. When these two wild bachelors take the town, no one will ever be the same! Find out why as you laugh your way through the final 11 episodes of Angry Beavers' hilarious third season! 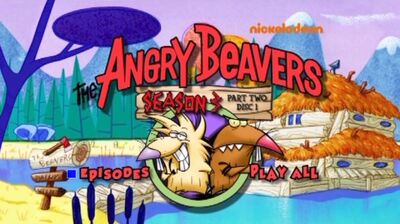 Retrieved from "https://angrybeavers.fandom.com/wiki/The_Angry_Beavers:_Season_3,_Part_Two?oldid=28052"
Community content is available under CC-BY-SA unless otherwise noted.